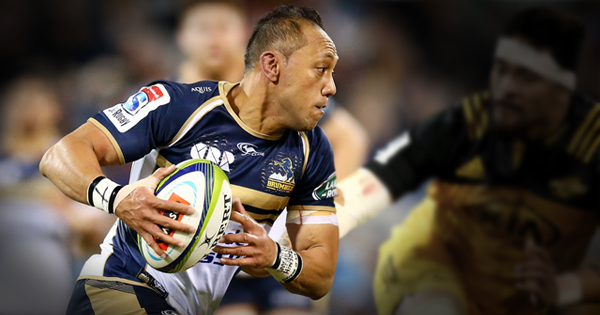 Brumbies and former Wallabies star Christian Lealiifano will continue his incredible return to rugby with a loan spell at Irish Province Ulster in the newly reformed PRO14 competition. It’s yet another milestone after a hard-fought battle with illness.

Lealiifano, who was diagnosed with leukaemia less than a year ago and undertook a bone marrow transplant in October 2016, was back on a rugby field for the first time in July when he was named as a replacement in the Brumbies Austbrokers Canberra Cup win in Singapore.

Playing just over twenty minutes in the 61-14 win over the Asia Pacific Dragons, the fly-half managed to land five conversions and looked sharp in attack and robust in defence.

Continuing his recuperation with a forty-minute cameo from the bench in the Super Rugby Quarter Final against the Hurricanes, Lealiifano is setting his goal to return fully to Super Rugby in 2018.

A short loan spell in Ireland, and some competitive rugby, will enable the pivot, who has 796 points for the Brumbies, to get more minutes under his belt ahead of the club’s pre-season campaign.

“I am looking forward to the challenge of playing for Ulster in the PRO14 on this short-term loan deal,” Lealiifano said of his European sojourn.

“Having missed almost an entire season whilst recovering, I feel that it’s important that I get some minutes playing competitive rugby ahead of the 2018 Super Rugby season and Ulster have provided a great environment for me to do that.

“They are a well-respected club and are genuine challengers for the PRO14 title. I have heard good things about the set-up there and am looking forward to working with the Ulster coaching team and squad.

“With this opportunity, I feel I can come back to the Brumbies in great shape ahead of the build-up to the new Super Rugby season. Dan [McKellar] and the Brumbies staff have been very supportive of this idea and I am excited by the challenges that lay ahead.”

Brumbies Head Coach Dan McKellar believes that the loan spell will be a definite bonus to Lealiifano come the start of the new campaign.

“We see a real benefit for Christian in joining Ulster for a brief period both on and off the field,” McKellar said. “On field, it is about Christian getting an opportunity to play professional rugby for a good club in a very strong competition.

“Off field, it is about Christian and his family getting the chance to experience a new culture and enjoy new life experiences that he was unfortunately denied 12 months ago. He has trained very hard with us whilst recovering and is in excellent shape.

“We wish him all the best in Ireland and look forward to welcoming him back to the Brumbies for pre-season training in early January.”