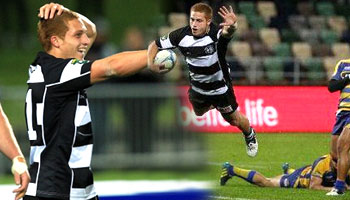 Hawkes Bay snatched a dramatic 42-41 victory over Bay of Plenty in their ITM Cup clash in Napier on Friday night. A late try and conversion capped off a thrilling game of rugby, which Bay of Plenty had led 38-18 early in the second half.

Elusive runner Gillies Kaka scored a hat-trick of tries on a night that went down to the last play of the game, when young replacement Ihaia West collected a ball somewhere around the halfway line, and sprinted away for a brilliant injury-time try.

The New Zealand U20 player’s try and conversion kept the hopes of Hawkes Bay alive after they looked to be facing relegation with a 15 point deficit to make up.

“There’s a lot of relief in the team and a lot of young players really put their hands up tonight after a tough couple of weeks. This is massive and there’s going to be a lot more positive chat come Monday,” said ecstatic Hawkes Bay skipper Mike Coman.

While West was the hero in the end, it was Kaka that dazzled, with one of his tries in particular an outstanding effort down the right hand touchline, with footballing skills to boot.

Bay of Plenty looked in control but somehow found themselves leading just 38-35 before giving away a series of penalties that allowed Hawkes Bay, and West, to pounce on a famous victory.

Below are nine-minute long highlights, covering all the action from a fiercely contested match