Contepomi and Fitzgerald combine for a great Leinster try 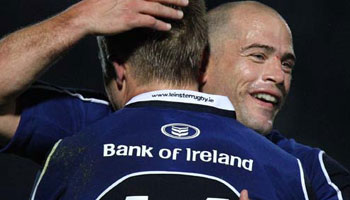 Reigning Magners League champions Leinster maintained their unbeaten run as they overcame a spirited Ospreys side 19-13 at the RDS on Friday night. It was the first loss of the campaign for the Ospreys, who put up a good fight despite missing a few key players to injury.

They did however salvage a valuable losing bonus point after a late Nikki Walker try that was brilliantly converted from the touchline by James Hook.

For Leinster though, it was young flyer Luke Fitzgerald who scored the try of the match at 24 minutes, taking his tally to four for the season after his superb hatrick against Edinburgh last weekend.

Brian O’Driscoll sent a flat pass out to Felipe Contepomi who’s slick interpassing with Fitzgerald put the birthday boy of last weekend over for a try that oozed class.

They say good rugby comes when you do the basics correctly, and Contepomi and Fitzgerald showed exactly that, as the draw pass, draw pass, meant the Ospreys defence had absolutely no chance of doing anything about it.

With Nacewa at flyhalf, O’Driscoll and Contepomi in the centers, and the recent arrivals of Wallaby Rocky Elsom and Springbok CJ van der Linde, Leinster now boast a wealth of talent and experience, and will prove a more than formidable opponent this season in the Magners League, and soon, the Heineken Cup. This could well be their season for European honours.

It’s since been confirmed that Isa Nacewa has actually broken his arm, and was operated on, but will be out for up to two months unfortunately.