David Lemi runs circles around Bath for this superb try 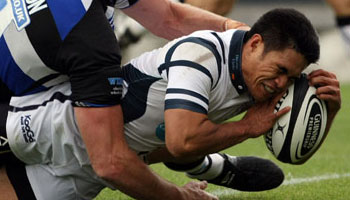 A few weeks back in the first round of the Guinness Premiership in England, Bath took on Bristol at the Memorial Ground, a venue at which they hadn’t won at since 1998. Despite scores being tied at the break and Bristol matching them in most facets of play, Bath were too strong in the second half, and came out eventual winners 33-20.

One of the best moments of the game, and perhaps the season, came shortly before the halftime break from little Samoan bullet, David Lemi.

Lemi, who weighs in at 75kg’s, is one of the smallest professional players around. That lack of size does nothing to deter him though, as he has had two successful seasons with Bristol, coming out top try scorer in the Guinness Premiership in his second. He’s also a Sevens star of note, and turned out for his country at the Rugby World Cup in 2007.

This try scored against Bath in the 37th minute was sublime, and while there were unfortunately no other angles of it at the time, we felt it had to be shared as he beat no less than six defenders with his balanced running and well timed stepping. He then chipped ahead, getting an unfortunate bounce but still managing to time the dive on the ball under the close attention of big Justin Harrison.

In a time when players the size of Matt Banahan are turning out on the wing, Lemi is another one of those small, fast guys who is no doubt an inspiration to the smaller wingers out there. If you’re quick, but you’ve ever doubted you can make it because of your size, just watch Lemi in action.