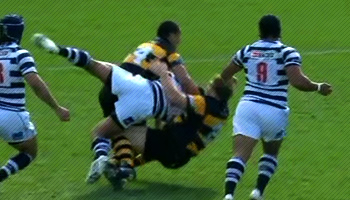 Auckland successfully defended the Ranfurley Shield on Sunday by defeating challengers Taranaki 22-6 at Eden Park, claiming the points in the Air New Zealand Cup at the same time.

One of the more spectacular tackles in the match came when flying winger David Smith broke back on the inside, cutting the line beautifully, but was then chopped down hard by two Taranaki defenders.

Smith took quite a knock, but after a few minutes he was back to his normal self again, shrugging off what looked like a stinger on the the shoulder.

Taranaki Hooker Laurence Corlett wasn’t as fortunate though, as he left the field shortly after this with a thigh injury. The injury came from the collision, as we saw Corlett stay down on the turf for some time directly after playing his part in the sandwich. It looked like the knee of Smith went right into Corlett’s thigh.

A week earlier he took a blow to the head, which meant he last only 25 minutes.

“Two weeks in a row coming off, it’s pretty disappointing,” Corlett said afterwards. “And to come off in a shield match is really gutting.”

We’ll try bring you all the best bits from the Air New Zealand Cup over the next few weeks. The tournament is just getting started, but already there’s been some great matches with a few upsets that have made it all the more interesting.

Andries Bekker tells the little ones to settle down