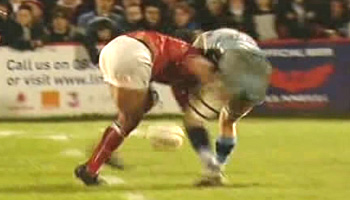 Sowden-Taylor may now need a shoulder operation and will have a scan on Thursday following an inconclusive X-ray.

The tackle, by former Chiefs & New Zealand Maori prop Manu, was deemed dangerous by the WRU Disciplinary Committee, although it was at the ‘lower end’ of the scale.

I’d say the suspension was more than likely influenced by the fact that Sowden-Taylor was unfortunate to get badly injured as a result. Good hit nine out of ten times. One problem though – he didn’t have the ball, so it was badly mistimed by Manu.