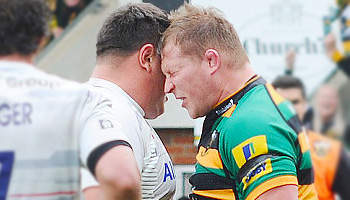 Dylan Hartley has been suspended from playing for four weeks following a RFU disciplinary hearing at the Coventry Holiday Inn on Wednesday night. The citing arose from an incident that took place in the Aviva Premiership Semi Final against Saracens last weekend.

Hartley, who pleaded guilty to striking an opponent with his head, contrary to Law 10.4(a), is free to play again on September 21, 2015. His suspension commences on August 15.

HHJ Sean Enright, who chaired the hearing alongside Mike Hamlin and Tony Wheat, said: “This offence falls within the low entry point for striking with the head.

“There was no significant injury to the other party, the opposition player was not removed from the field of play and the incident did not affect the game.

“However, there cannot be any place in our game for this class of behaviour, and that is why we have imposed this sanction.”

Saints skipper Hartley’s previous disciplinary record, now totalling 54 weeks suspended (just over a year total), no doubt had a lot to do with the ruling. 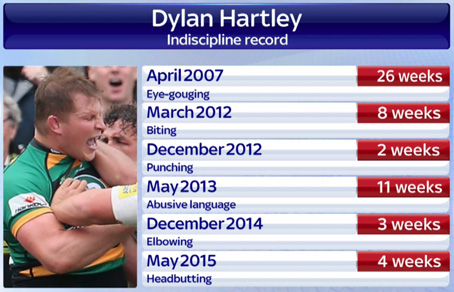