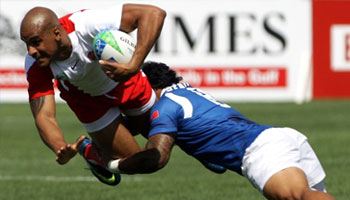 The IRB Rugby Sevens World Cup came to a close this past weekend in Dubai as we saw a thoroughly entertaining festival of running rugby capture the minds and hearts of the crowd and watching audience around the world.

One of the best games of the tournament came in the Quarter Final stages as England and Samoa battled it out an epic match that went to sudden death extra time.

Samoa scored early but it was the in form Tom Varndell who answered back from the restart with a trademark try. Samoa scored again, taking the score to 21-7 at the break.

Varndell scored another try shortly afterwards with a fantastic step before gassing it to the corner. Samoa came back with another try, before Ollie Phillips touched down, taking the score to 26-19 to Samoa.

As the buzzer went for full time, it looked as though Samoa had won the match, but a controversial decision meant that the lineout was to be played, which resulted in England scoring through Josh Drauniniu, taking the game into extra time at 26-26.

In sudden death it was stalwart Ben Gollings who somehow made a terrible choice to not pick up a loose ball, resulting in Samoa scoring first and winning this classic match of Sevens rugby.

We’ll get footage of the final up for you as soon as possible.