England outpace the Wallabies at Twickenham 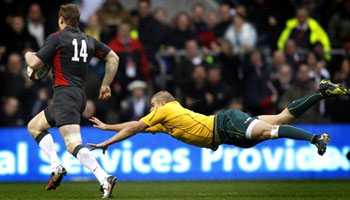 England got the better of Australia for the second time in succession as they beat comfortably beat the visitors 35-18 at Twickenham on Saturday in what has been described as their best performance since winning the World Cup in 2003.

Their were signs of great things to come a week ago when going down valiantly to New Zealand, but this time around there was no doubt that this may well be a new era for English rugby as they mixed their power up front with an expansive style of play.

Fullback Ben Foden has insisted its worth keeping their feet on the ground at this stage however. “Legends aren’t made out of one result,” he said.

“We need to keep working and getting better and better and hopefully by the time the World Cup comes around we will be there or thereabouts. It was a pretty convincing win and we can be pretty happy with the sort of rugby we played,” Foden added.

Wallaby coach Robbie Deans, whose team came into the match following wins over the All Blacks and Wales, said that he could see a big game from England on the horizon.

“I have seen it growing in this England side. They played better against the All Blacks but were frustrated with where they got to. They will take a lot out of it,” Deans said.

“They are broadening their game and had success with it against us. They took initiatives in speeding up the game that worked for them,” he added.

England scrumhalf Ben Youngs had an outstanding game, as did Chris Ashton, who scored two fantastic tries. The second of which was started by Youngs behind their own tryline, with dynamic lock Courtney Lawes then drawing two men before releasing Ashton. The Saints flyer then put in an incredible 90m sprint to score a sensational try.

“The southern hemisphere teams have to take us seriously. That was our main aim to put ourselves up there and make sure we’re competing with the big boys. That’s what we’ve gone out to do. We’ve put down a marker now,” said Foden.

Rucking Insurance takes care of health insurance for rugby players in the US. If you’re looking for coverage so that you can play this great sport and still feel safe, get in touch now.