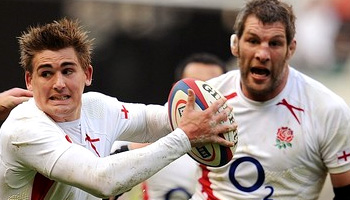 England finished on a high yesterday as they regained the Calcutta Cup with their 26-12 win over Scotland at Twickenham. They have now won three of their five matches in their first Six Nations under Martin Johnson.

The Scots werent going to be an easy task though, and played hard, making the task a far more challenging thing than the ease at which England dismissed the French a week prior.

Tries were scored for England by Ugo Monye and Riki Flutey in the opening period, with the third being scored by Mathew Tait, two minutes from time.

Scotland have now lost four out of their five matches, with their only win being that over fellow strugglers Italy.

Frustrated coach Frank Hadden said: “As you can imagine it’s a very flat changing room. Considering the territory and possession England had today, after 70 minutes we were in the game and had the opp to pull off a special win for our long-suffering supporters.

“But one or two elementary errors cost us.”

England coach Martin Johnson was satisfied with the result.

“We lacked a little cutting edge in the second-half, there was a bit of fatigue. It was strange to have that domination of possession and territory but to lose the penalty count 2-1. But it was good that the guys played for a full game to get the win.”