England victorious over Italy at Twickenham 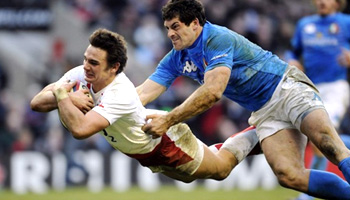 Harry Ellis scored two tries as England defeated Italy 36-11 in the opening match of the 2009 Six Nations on Saturday.

Martin Johnsons Six Nations campaign got under way in a less than convincing manner, with most of the English tries coming from the visitors errors. Nevertheless, a win is a win, and a good start to the tournament.

Italys coach Nick Mallet experimented with playing classy flanker Mauro Bergamasco at scrum half. It failed dismally, as he had an absolute shocker which led to him being substituted at half time.

With a regulation number nine on, Italy looked a far more dangerous side in the second half, creating opportunities.

England finished stronger though, playing some of their best rugby in the last five minutes.

It was a scrappy match, but a fair result on the scorecard for England. Next week they take on Wales, which promises to be a far more exciting encounter.