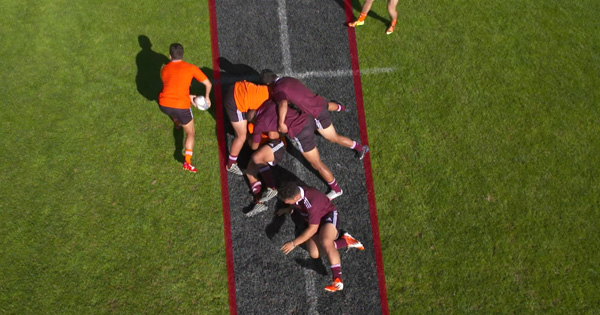 The launch of New Zealand’s domestic rugby season came with a new set of law trials, in both the Mitre 10 Cup (the NPC) and the Mitre 10 Heartland Championship. As we saw in round one of the Mitre 10 Cup, it is definitely a lot quicker.

After the most recent World Rugby law review, New Zealand Rugby have taken the law trials on board with a balance being struck between player safety, simplicity in application and understanding, and overall enjoyability.

On 1 January 2016 amendments to certain laws took effect in all levels of New Zealand Rugby concerning mauls and scrums. Super Rugby was the first to implement these changes.

Now New Zealand Rugby take on this next set of experimental laws, as World Rugby looks to improve certain aspects that should provide a more attractive game for fans and players.

The crew at the Breakdown on Sky Sport took a closer look after the first round of play.

Teams awarded a penalty after halftime or fulltime who choose to kick directly to touch must play the lineout.

1. The tackler must release the ball carrier then re-join the tackle behind the midpoint to play the ball.
2. The first arriving defender may play the ball as long as they are on their feet, and prior to the breakdown being formed.
3. Players off their feet are out of the game.

After consideration and review by World Rugby, it remains a possibility that they would consider a global trial of some or all of these laws in 2017, and potential adoption in 2018.

The video below explains the various aspects in finer detail. Let us know your thoughts?