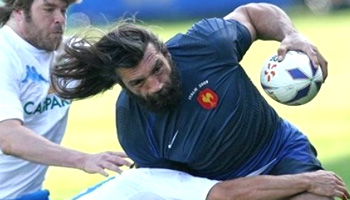 France pumped Italy 50-8 in Rome on Saturday as they bounced back from their emphatic loss to England last weekend. Their resolute performance saw them end their Six Nations on a high, but it is Italy who now face an uphill battle going forward.

The hosts were dire for the most part, and way too easily outgunned and outmuscled by the far more professional French outfit.

“I think that the score was 6-3 at 20 minutes,” Italys coach Nick Mallett said. “Then there was an up and under on Paul Griffen, who missed it and they moved the ball quickly and Chabal scored. Six minutes later it was 21-3. If you give away so many points in such a short space of time, it is a long way back.”

The next few weeks will be nervous for Mallett to hear if he will be kept on for Italy’s tour to New Zealand and Australia.

“There are lots and lots of things (that need to be worked on). I have spoken to the president about how to improve Italian rugby, not only the national team, but also how to produce better players,” Mallett said.

“It is too easy to blame the coach or the players when we lose. We need to look at what we can do to improve the level so that we are always ready for this level and not only now and then.”

French coach Marc Lievremont was satisfied with the result from their side though.

“The main thing was to close the tournament with a win,” Lievremont said. “The first half was good, the second less so. It doesn’t make up for the loss at Twickenham, but it is good to win nonetheless.