France win at home against a determined Scotland 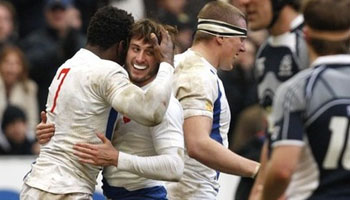 Scotland held their own in the first half and winger Thom Evans added to two earlier Phil Godman penalties with a try ten minutes from time but the visitors never seriously threatened to beat the home side.

France coach Marc Lievremont, who said before the match that a loss would be a “humiliation”, was disappointed by a series of French errors and a failure to break down a determined Scottish defence more decisively.

“There was a lack of precision, too many mistakes,” he told a news conference. “I had been hoping for a nice evening, spending Saint Valentine’s with my wife but I think I’m going to have to be getting in a video session to see what went wrong.”

Scotland captain and scrumhalf Mike Blair said the team had battled well in the face of a lopsided 7-3 penalty count.

“There were things that went against us and we were still right in the game against a good French side,” he said.