Friday Funnies - How far offside can you go 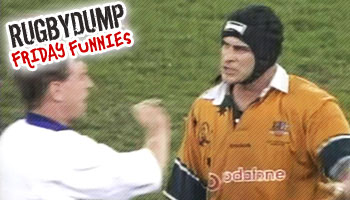 Stadium Australia in 1999 hosted the match between arch rivals Australia and New Zealand, played out in front of over 107 000 people. It was the final test for both sides before the World Cup, and proved to be a great run out for the team that went on to lift the trophy in Wales a few months later.

One of the more comical moments in the match came when Wallaby captain and flanker David Wilson found himself horribly offside after a couple of kicks were exchanged by both sides.

Wilson felt he was onside when the ball was tossed to Justin Marshall, so he proceeded with the tackle, only to be penalised by ref Jim Fleming.

The match ended 28-7 to the Wallabies, with Wilson going on to lift the Bledisloe Cup.