Gloucester and Bath go toe to toe at Kingsholm 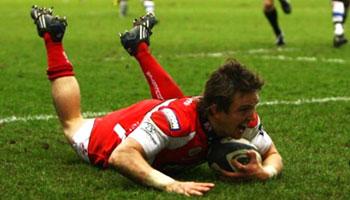 Last weekend in the Guinness Premiership we saw Bath take on league leaders Gloucester in a derby match that turned out to be somewhat of a classic. Gloucester won 36-27 at Kingsholm, outscoring Bath by four tries to three in the thriller.

Winning coach Dean Ryan hailed both sides for their displays.

“I thought it was an outstanding game and credit to everyone who took part in it. Of the games I’ve seen between Bath and Gloucester, that was right up there,” said Ryan.

“There’s a Six Nations going on and that game went on underneath it. That’s a tremendous credit to both clubs. And I think both clubs showed they are where they deserve to be at the top end of the league.

“There were quick minds out there from Bath as well as us and a lot of the things that happened came from sharp thinking.

“When people think quickly, they find opportunities and I thought everyone out there was on that level.”

The level of intensity in the match also added to the spectacle.

“That was as big as the game here last year, it just had more points,” said Ryan.

“For physicality, enterprise and ambition, I thought it had everything.”

“That’s as well as we’ve played for a while and I thought Carlos Spencer really pulled the strings.”

We’ll have more Premiership action for you where possible.