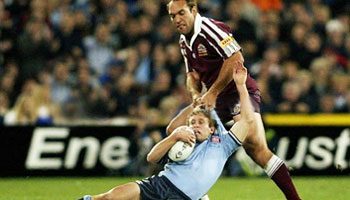 Rough day for RD. Been really busy and had some personal issues to deal with, but here we go with another interesting and slightly comical clip to add to the archive.

The NRL State of Origin 2008 game 3 decider ended in Sydney on Wednesday night with the Queensland Maroons team taking the series in a thrilling 16-10 win over the NSW Blues.

Now while we are predominantly Rugby Union based, the occasional League clip definitely has its place on Rugbydump, and the latest State of Origin series reminded us of a famous tackle that occurred way back in 2002.

It will be very familiar to the League fans out there, but for the Union fans, itll be more of a talking point perhaps, but once you see this tackle, you wont forget it and will be praying it never happens to you.

So to pay tribute to the epic State of Origin series, six years ago almost to the day, this is the legendary moment when Brett Hodgson got scrambled off the field like a rag doll by

Grabbed by the collar and flung like a sack of potatoes, Hodgson was well and truly put into touch, with the debates about its legality raging on for years to come.

Look out for a very young Timana Tahu, one of the most recent


now playing for the Waratahs and Australia A