Guinness PRO12 Highlights and Wrap-up from Round 19 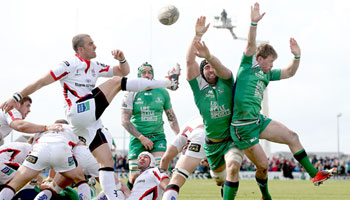 The Pro12 supplied another dose of high quality rugby as the regular season begins to come to a close. In arguably one of the most unpredictable weekends of the season, 9th placed Dragons shocked former champions Leinster at Rodney Parade while the Scarlets survived a scare with a last minute penalty to beat Zebre in Parma.

View all the match highlights and recaps

The Pro12 supplied another dose of high quality rugby as the regular season begins to come to a close. In arguably one of the most unpredictable weekends of the season, 9th placed Dragons shocked former champions Leinster at Rodney Parade while the Scarlets survived a scare with a last minute penalty to beat Zebre in Parma.

While Glasgow’s veteran hooker Dougie Hall opened the scoring with a 24th minute try, it was influential winger Tommy Seymour who played a part in two excellent tries. A bursting run up the far touchline opened the defence before the Scottish international fed full back Peter Murchie who then sent a fast approaching Horne in for the second try.

Four minutes later Horne was in again, and again Seymour was the architect. Coming off his right wing, he seamlessly offloaded off the ground to Horne who sped in under the posts from the 22.

Cardiff struggled with territory and possession throughout and extended Glasgow pressure told at the end of the first half as Horne scored his third try.

Glasgow scored their fifth and final try through Number 8 Adam Ashe who showed considerable pace to streak in from the Cardiff 10m line. Cardiff fought until the end and their endeavour paid off as they scored consolation tries through Gareth Davies and Dan Fish.

Glasgow remain top of the league after securing yet another try scoring bonus point. They maintain a two point lead over Munster in the standings.

Ospreys arrived in Treviso surprisingly looking for only their second away win since October. But this was one they most certainly had to win to keep in the hunt for a playoff position.

A cagey first half saw a relative stalemate until Ospreys winger Eli Walker cruised through somewhat average Treviso defence on the brink of half-time. Testament of how dangerous Treviso can be when given the opportunity, the home side fought back early in the second period.

Making the most of a yellow card for Ospreys prop Nicky Smith, Treviso scored a superb try from Simone Ragusi. Ragusi had a lot of work to do as no fewer than three Osprey defenders tried to bundle him into touch. But the winger did brilliantly to touch down; the score confirmed after a TMO consultation.

Treviso could not score when the Ospreys were reduced to 14 men following a Rhys Webb yelow, and the visitors pounced through a Dan Evans try.

The pick of the tries came two minutes from the end as Justin Tipuric finished off a fantastic piece of interplay, combining forwards and backs. A quick offload from a Ben John half break to Tipuric opened up space, before Tipuric and Webb combined beautifully to put the flanker under the posts.

The much needed win ensures the Ospreys stay in the top 4 in the league. And with Leinster’s defeat to the Dragons, a playoff spot looks rosier for the Swansea side.

A strong Ulster side got made the best possible start after a well constructed Louis Ludik try after four minutes. The full back exploited the early pressure exerted by the visitors to go in at the corner.

Playing with a strong Galway wind behind them, Ulster made further damage to Connacht’s hopes with a fine try from Tommy Bowe. The winger latched onto a lovely flat pass from Paddy Jackson to run in at the corner.

A further try from fellow winger Craig Gilroy – the leading try scorer in the Pro12 this season – gave the visitors a healthy 17-0 half-time lead.

Ulster hit back and two further tries, firstly from Bowe getting his second, and Rory Best helped the Ulstermen extend their advantage.

Connacht didn’t submit though and ensured a grandstand finish. A Mia Nikora penalty and Tiernan O’Halloran try narrowed the gap to just seven points heading into the final 10 minutes. Ulster held firm though and saw out a 27-20 victory.

The Scarlets arrived in Parma with an immaculate record over Zebre and the Welsh side needed victory to enhance their top 6 finishing aspirations.

Scott Williams scored the visitors’ first try of the match after a charging break from flanker James Davies. The ball was recycled quickly to Williams who raced clear for the first of his two tries.

Zebre hit back though through a clever bit of play from Hennie Daniller. The South African kicked and second row George Fabio Biagi who re-gathered to score.

In the closing stages, it was Zebre’s turn to see yellow as Matteo Pratichetti was forced to sit out for ten minutes after a dangerous tackle in the run up to the Scarlets third try, scored by James Davies.

Davies’ score put the Scarlets back in the lead with minutes to spare. But Zebre, through a Gonzalo Garcia penalty retook the lead with three minutes remaining. Rhys Priestland made up for his late penalty miss two minutes into overtime to finally sink a defiant Zebre.

Engulfed in the battle for the top 6 with the Scarlets, Edinburgh looked to build on their recent good form in the Pro12. Munster on the other hand, were aiming for a win to boost their chances of a home semi final.

An early Tom Heathcote penalty put Edinburgh into a 3-0 lead, but those would be the only points scored by the home side as they were out-muscled by an experience Munster outfit.

Munster used their ferocious rolling maul to score their first try shortly before half-time; hooker Duncan Casey credited with the try. They used their superior power early in the second half again as Number 8 CJ Stander got the visitors’ second try.

Edinburgh by now, were facing a large losing margin as they struggled to win set piece ball. A heavy penalty count did not help either as Munster dominated both territory and possession.

Further tries from Conor Murray and Simon Zebo secured the bonus point before Keith Earls capped off a job well done by the Irish side.

Leinster had hoped to put an end to a recent loss of form against an in form Dragons side at Rodney Parade.

An early Jason Tovey penalty and a Rhys Thomas try gave the home side a 8-0 lead. Leinster hit back through a Jimmy Gopperth penalty and a Ben Te’o try before Gopperth scored a brilliant individual try to seemingly put the visitors in command.

Te’o got his second try early in the second half and the 22-8 scoreline looked to be too much for the home side.

The Dragons however would not be intimidated by their prolific rivals and fought back in equal measure through Jack Dixon to reduce the deficit after 58 minutes.

James Benjamin’s brace of tries – his second coming with just seven minutes remaining gave the Dragons a hard earned second victory over Leinster this season, having won the away fixture 16-14 at the RDS.