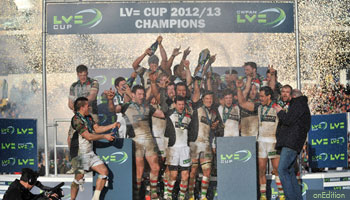 Harlequins were crowned LV= Cup champions after a convincing 32-14 victory over Sale Sharks at Sixways on Sunday. They scored two tries in either half, securing the win to keep their hopes of a historic treble alive.

Quins won the Anglo-Welsh cup for the first time since 1988, and are now set up to aim for a historic LV=Cup, Premiership, and Heineken Cup treble.

“I’m just over the moon for the group. It is a long way into the season and we face a massive next nine weeks but, for those players, that is something that is a reminder to everyone coming back in the next couple of weeks,” said director of rugby Conor O’Shea.

“For the club, not only is it a major trophy – when you look at four guys in the tight five who are 21 and under, that is something for them to store away in their locker for years to come and they are the cornerstone of what this club will be about for a decade or more.

“They have won a national trophy and we said before the game not to take anything for granted because you never know when you will get there. We have been very fortunate to be in a number of finals in the last few years and to have come away with a trophy.

“There is a good vibe in the dressing room and a lot of very proud parents of young men.”