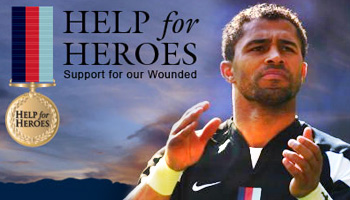 Twickenham played host to a very special game of rugby this past weekend. It was certainly special in terms of the players on display, but more importantly it was about the rugby public and players coming together to raise money for the Help For Heroes fund.

All money raised, announced as being over 1 million on the day, goes directly to the fund which will support the rehabilitation of wounded service personnel who have served their country in Iraq and Afghanistan.

As the day began with an emotional video on the big screen of a young soldier who was maimed while on duty, the reality of the cause hit home.

This was not a political day, far from it. It was a day to pay homage and respect to those who serve their country in the ugliest of battles. So while it was a friendly meeting between two sides made up of legends of the past and young stars of the future, the match was played hard, with both sides giving it their all for the cause.

Jason Robinson and Will Greenwood in particular both showed that their time out of the game had no ill effects on their skill level. Robinson himself threatened all match, but it wasn’t until the 79th minute that he found some space to electrify the 52 000 strong crowd, and show off some of that magic of old.

The Help for Heroes XV (England) featured former stars Lawrence Dallaglio, Martin Johnson, Dan Luger, Richard Hill, Robinson and Greenwood. But it also included young talent, most notably in prop Nathan Catt, who was a standout performer on the day and a real star of the future.

The International XV was led by Welsh legend Scott Gibbs, who showed his class, most notably when setting up the try for 18 year old Ospreys flyer Kristian Phillips. Other big names included Kenny Logan of Scotland, Colin Charvis of Wales, and Ireland’s Justin Bishop.

Both teams, perhaps more importantly, included players from the services themselves, who got to experience that Twickenham atmosphere first hand.

An enjoyable match to watch, the Help For Heroes XV won 29-10 in the end.

If you would still like to donate to this worthy cause, you can find all the information available to you at

There are bound to be servicemen and women who are on duty abroad but sometimes manage to check the site, so if you’d like to leave a comment for them, please feel free to do so.