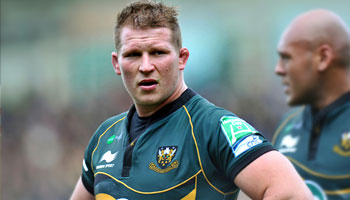 Northampton Saints hooker Dylan Hartley has been cited for an incident that took place in the Heineken Cup Pool 4 match at Franklin’s Gardens on Friday night. If found guilty, his previous record would lead to one thinking he will receive a fairly hefty ban.

Hartley got in a bit of an off the ball tangle with Ulster hooker Rory Best, leading to what is alleged to have been strikes to the face with the arm or elbow.

The hearing will take place on Thursday and the England hooker will no doubt be in a bit of trouble as his disciplinary record is anything but squeaky clean, with previous misdemeanours including biting and eye gouging. He was banned for eight and twenty six weeks respectively for those.

With the Six Nations in February and Leicester Tigers hooker Tom Youngs doing a good job during the end of year tours, a heavy ban could mean Hartley will find it tough to force his way back in, which would be disastrous for him considering there are British & Irish Lions spots up for grabs.

Hartley appeared to take took three shots, the first of which may have missed, but the second two seemed to make contact. While you can’t condone it, in years gone by this would be viewed as just another scrap between two fiercely competitive hookers. These days, you won’t get away with it.

The citing commisioners may have another angle to use, but based on what we see here, do you think Hartley deserves to be banned, or as he said post match, is this not really an incident at all?