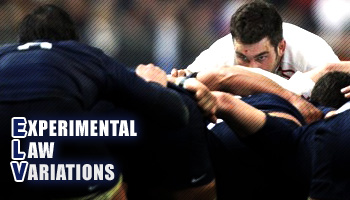 The International Rugby Board’s Experimental Law Variations (ELV’s) are now in full effect, having got underway globally on August the 1st. The worldwide, 12 month trial will encompass all levels of the game, incorporating 13 experimental laws that were approved by the IRB Council at their recent meeting in Dublin.

The ELVs have been trialled in the Super 14, and are currently on display in the Tri Nations. They have been well received by players and fans alike so far, and the next phase of progression will be to see if they will be positively received in Europe.

While the ELV’s are designed to simplify the game, they’ve been widely criticised by many, particularly those in the Northern Hemisphere who feel that the new laws are purely in the interest of teams like Australia, who will benefit from the style of play the laws encourage.

Rod Macqueen, member of the IRBs Laws Project Group working on the ELVs dismisses those claims, stating that the laws are merely to return the game to what it once was.

The people that are saying the ELVs are designed to make the game faster etc, that was never the case, that has never been part of the criteria. The criteria has always been to make sure that we kept it a game for all shapes and sizes, but try and make it simpler and in a lot of ways bring it back to the game we used to have when there was actually more space on the field and more breaks to be able to come about.

In fact the game that we have got today, that we saw in the World Cup, under the current laws is quite different to what the game was like 20 years ago. In fact dramatically different.

The IRB will meet again early next year to decide whether the proposed laws should be adopted for good or not. Their goal is to get a single set of laws agreed upon as soon as possible.

Results so far have been positive. In this years Super 14 there were more tries, fewer lineouts, fewer penalties kicked, and the ball was in play longer. There were roughly the same number of scrums, more mauls and many more free kicks.

A recent survey has also shown that 83 percent of players playing under the new laws found them to be a positive for rugby, with almost 90 percent of the 260 respondents stating the laws were easy to understand and result in more continuity.

But, for the critics,

Why fix something that isnt broken?

has become the clich of choice recently, with fans and former players questioning the move to turn the game into more of a Rugby League type contest.

The reality is such that like it or not, its going to happen, and we have to adjust to it for now whether it becomes permanent or not.

The IRB are by no means out to ruin rugby. They are however experimenting with a few changes that may well improve certain aspects of the game for all involved.

Former England flanker Neil Back is one who is optimistic, keeping an open mind about the laws that many have pessimistically dismissed.

“The ELVs are here to stay, for this season at least. I approach them as with anything else new in life and in rugby: you have got to be positive. I don’t entirely agree with the rule changes, as I’ve said before, but it is important that we embrace them and deal with them.”

This 17 minute video released by the IRB hopes to give you a better understanding of the ELV’s, with footage used to further explain how they look in action.