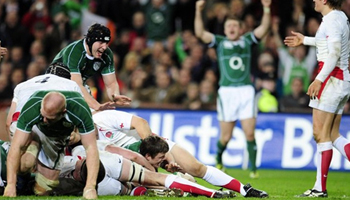 Ireland survived a late scare to beat England 14-13 on Saturday and keep its chances for a Six Nations Grand Slam.

Ireland was leading 14-6 with two minutes left when Delon Armitage touched down for the visitors. The conversion pulled England to within a single score but time ran out when wing Mark Cueto spilled the ball in a tackle.

The result leaves Ireland atop the Six Nations standings with a maximum six points from three matches. The Irish are the only team still able to complete a Grand Slam of wins.

England improved vastly on the performance that resulted in a 43-13 mauling on its last visit to Dublin two years ago, but paid for undisciplined play yet again as two yellow cards meant it spent 20 minutes with 14 men.

O’Driscoll played the whole match despite appearing to be slightly below his best because of an injury and scored eight of his team’s points. But his try and drop goal both came after a first half that surprisingly left the teams tied at 3-3.

“It was a hard game,” O’Driscoll said. “I’ll have to look back at it because some parts are a bit hazy for me

“I don’t think people give England the credit they deserve. They’re always a hard team.”