Ireland beat Wales to win the Grand Slam in Cardiff 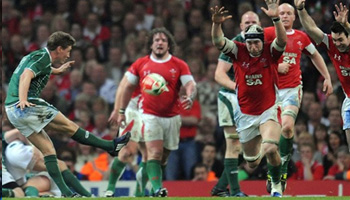 Ireland have arrived home in Dublin to a heroes welcome after they successfully claimed their first Grand Slam since 1948, beating Wales 17-15 in a thriller at the Millennium Stadium.

Ireland completed the unbeaten five match run with the win in Cardiff, after tries scored by Brian ODriscoll and Tommy Bowe, and seven valuable points kicked by Ronan OGara, including a drop goal in the dying moments of the match.

While Wales needed 13 points and a win to take the Six Nations Championship themselves, in the end they simply lacked the firepower, but did have the chance to take the Grand Slam away from Ireland, through a last ditch penalty kick from Stephen Jones.

Jones kick sailed straight and true, but landed just under the cross bars, meaning Ireland won the Grand Slam for the first time in 61 years.

“We’ve been close before but it’s an absolute delight that finally we achieved our goal we set out to do,” said iconic captain O’Driscoll.

“The guts of this team have been together for a number of years and we wanted a big one, we wanted a slam.”

“You need the occasional kick to drop short, you need the bounce of ball now and then, and the odd referee’s decision. It all helps,” he said.

“I felt that on overall performance we deserved it, but you need that bit of lady luck and thankfully 10 years of luck came today.”

So 15 000 fans welcomed them home on Sunday, lining the streets of Dublin, desperate to catch a glimpse of the heroes who did their country proud.

It was an excellent Championship, and in the end, Ireland come out tops, and well deserved too. Congratulations to them.