Italy stun Argentina with a last minute win in Cordoba 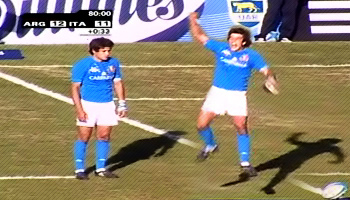 Italian replacement Leonardo Ghiraldini scored a last minute try that set up a dramatic 13-12 victory over Argentina in Cordoba, stunning the hosts who had led for the entire match.

The game was dominated by the forwards and produced very little of the free flowing rugby that we were hoping to see from a young Italian side with nothing to lose, and the Pumas who are ranked third in the world, with star flyhalf Juan Martin Hernandez starting the match.

Referee Matt Goddard captured most of the attention though, giving 30 penalties during the match that was anything but the spectacle we had all anticipated. Perfect weather conditions didnt deter both teams from keeping it up front and turning it into, quite frankly, a boring game for the neutral.

The half time score of 12-3 had Argentina in control after two penalty kicks each from Hernandez and Bosch, to the one from Marcato.

Hernandez leaving the field with a wrist injury more than likely threw the home side off their game, with replacement Bosch later missing two penalties after Marcato reduced the deficit to six points in the 50th minute.

Argentina paid for those missed kicks after Italy surged forward and managed to drive over on the third attempt with Ghiraldini scoring the try that set up Marcatos vital match winning kick.

With the score at 12-11 to Argentina, the pressure on the Treviso flyhalf had no affect as he duly slotted the conversion, sparking celebrations amongst the jubilant Italians, and misery for the home team and crowd who must have been wondering just what went wrong.