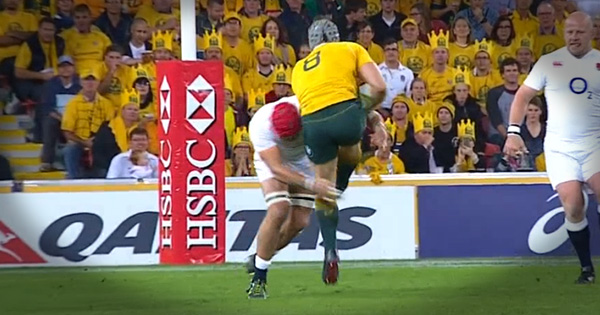 James Haskell put in arguably the best performance of his career as he helped England to a famous victory over the Wallabies in Brisbane on Saturday. The veteran flanker started the match with huge intent, making this crushing tackle on David Pocock within minutes of kick off.

The 31-year-old has now been capped 69 times for England, but has said quite openly that he finally feels a core part of the team under new coach Eddie Jones.

Haskell received major plaudits post match, with both Sky Sports and Fox Sports Australia naming him as their Man of the Match, heaping praise on a fantastic performance.

He posted this photo yesterday and said that he was honoured to have swapped jerseys with Pocock after the match. He also said that he’s never had this many people be so nice to him.

Great honour to play in the White of England again; with these boys. @chrisrobshawrugby and Billy V. Tough game. Really honoured to swap shirts with @davidpocock post match. 2 more to go. Thank you for the kind messages. Everyone is being very nice, which is disconcerting 😜

“He’s (Smith) worked tirelessly with us and especially me, and tonight it came off, some nights it doesn’t. So I’m not getting carried away, but for an old dog like me it’s quite nice to have a bit of a moment in the sun.”

England will now prepare for the second Test in Melbourne, and the Hask is already back to his role as entertainer on social media, posting this video yesterday of him chatting to Ben Teo.

There’s a mention of the tackle on Pocock in there, with Haskell saying he thinks it must have been someone else who did it. He also rated Teo as a 8 out of ten in the looks department.

At the airport on the way to Melbourne. Just had a quick catch up with Ben Teo. https://t.co/qv2EWqcUj5

Pocock was unfortunately injured later in the match and will play no further part in the series, after fracturing his eye socket in contact at a ruck.

That, and the dominance they showed in Brisbane, will give England even greater belief that they can go on to win a historic first ever series down under.