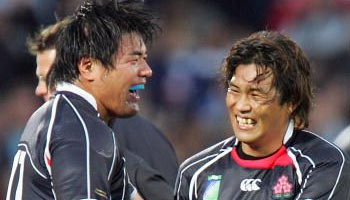 Japan bid farewell to the 2007 Rugby World cup this week in their match against Canada. The match ended as a 12-12 draw after some brilliant fighting spirit was shown by the Japanese.

A thrilling final try and equalling conversion in extra time was the lifeline they needed. A fair result and one of the most exciting ends to a match I’ve seen all tournament.

Earlier in the game though there were some huge hits put in. Real bonecrunchers that made the Cannucks think twice when taking it to the line. Great to see guys who are normally known for being small and fast putting in big hits.

I’m neither a Canadian nor Japanese fan, but for the neutral, a fantastic game of rugby with a nailbiting finish. In a lot of ways it felt like a victory to Japan though.

We’ll try get the ‘equalling’ final kick up here soon.