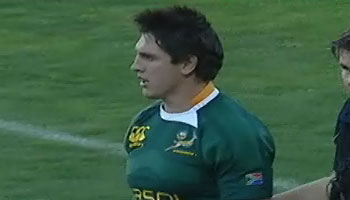 Springbok center Jaque Fourie, who’s last Test for his country was the World Cup Final, made his comeback on Saturday against

. After an injury lay off of months, his successful recovery meant that he could join the team and take part in the Tri Nations.

Fate had other ideas though, as within five minutes of making his entrance into the game, his attempted tackle on Argentinian right wing Piossek ended in disaster for the big center, as the collision meant his first significant involvement was also his last.

The clash of heads fractured Fourie’s right cheekbone, which means he will require surgery this week. He will then be out of action for 6 weeks, ruling him out of the remainder of the

A place in the squad has again opened up for young

, with the toll of the friendly between Argentina and South Africa also claiming the scalp of enforcer

, who’s knee injury means we won’t see him in action again this tournament either.

The clip also shows a big hit from

, and a superb try saver by

after Piossek bounced off Fourie.