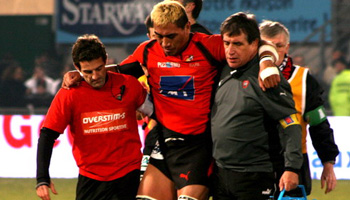 Some of you may have heard about Toulon flanker Jerry Collins being injured on the weekend after only ten minutes in the Top 14 match against Brive. Thanks to another valued contributor and fan, we’ve got the clip showing exactly what happened.

The injury was sustained as opposition prop Pascal Idieder went in extremely low for a tackle on Collins legs, causing the knee to twist and the big former All Black to be left lying on the floor writhing in pain.

Collins will be sidelined for what looks like six to eight weeks with the knee injury, adding misery to Toulons already disappointing season.

According to their website, the scan has revealed that he has strained his knee, but the cruciate ligaments were not ruptured.

The tackle technique in question looked rather strange to say the least. Yes, get in low on a big guy, but the ball had been passed and there was no attempt to run through Ideider, so for him to go in low like he did, was very peculiar.

There have since been murmurs of foul play, with some accusing the Brive prop of of a deliberate attempt to cause damage. To others though, perhaps it was simply clumsy.