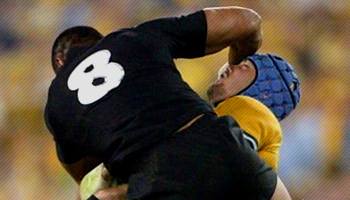 Hard hitting former All Black Jerry Collins is known for being somewhat of an enforcer, and has over the years put in a few famous tackles that have


more often than not


left the opposition lying on the floor in a heap of dizziness and discomfort.

Back in the 2003 World Cup Semi Final, when Australia stunned New Zealand by knocking them out the tournament with a 22-10 victory, the ferocious number 8 sent Wallaby lock Nathan Sharpe into la la land temporarily, with a hit that had viewers around the world cringing.

The high shot all but knocked Sharpe out. Collins was lucky to escape a visit to the sin-bin, instead, he got a stern lecture and telling off from referee Chris White, and added to his reputation as one of the hardest hitters in the game.

Timing, Sharpe lowering into the tackle maybe – there are a number of factors that could have accounted for the hit looking as bad as it did. One thing there is no disputing though is the impact, with Sharpe being knocked back hard from one of the hits of the tournament. He was also probably very lucky to avoid injury, as his and Collins body weight came down on his crumpled legs below.