Joe Marler will face no punishment for 'Gypsy Boy' comment 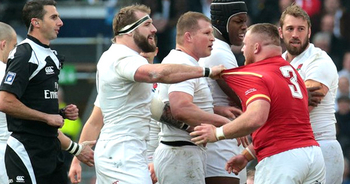 England prop Joe Marler can breate easy now knowing that he will not be punished for the derogatory comment he made towards Wales prop Samson Lee last Saturday. While Marler has been cleared, coach Warren Gatland himself was also under fire.

Marler called Lee ‘gypsy boy’, which could be heard on the referee’s microphone during a brief scuffle between the two team’s forwards. He reportedly regretted it straight away and on his own accord, sought out Lee to apologise at half time.

The reaction was huge though, with many people campaigning for the England prop to be banned, deeming the comment to be incredibly racist, with no place for it in the game.

Coach Gatland on the other hand said it was simply banter, but had to quickly retract that view, releasing a statement to clarify the seriousness of what was said.

“I don’t condone racism of any kind. I apologise for any offence my use of the word banter may have caused. My intention was to take the focus away from Samson, a private individual, and enable him and the rest of squad to prepare for the final game of the championship,” said Gatland.

“My comments were made following a discussion with Samson about the incident. He believed Joe made his comment in the heat of the moment, he later regretted it and apologised, but Samson believes it wasn’t racist in intent and he accepted Joe’s apology.”

Six Nations Rugby ‘conducted a thorough investigation’ and have said that they do not condone what was said, however they have considered the reports in detail and noted the fact that Marler deeply regretted what he had said and had immediately and unprompted apologised to at half time.

They also noted that Head Coach of England Eddie Jones had reprimanded Marler and reminded him of his responsibilities as an International Rugby Player. They accepted the explanation that the comment was made in the heat of the moment, and taking all facts into account, decided to take no further discplinary action.

“I have accepted from the outset that I made the misguided remark to Samson,” said Marler.

“It was made in the heat of the moment. I apologised, unprompted, to Samson Lee at half time and this was accepted. As ever we shook hands and exchanged smiles at the end of the game. I have been warned very clearly by Eddie Jones how comments like this are unacceptable.

“I will certainly conduct myself differently in future. I do not condone racism in any form, at any time, deeply regret the incident and intend to reflect the behaviours expected of an England player going forward. Once again I apologise for the upset my inappropriate remark has caused”.

Lee himself had the following to say, particularly pertaining to Gatland.

“I would like to explain my point of view. I stand beside Warren. I personally believe the comments to have been intended as banter and accepted Joe’s apology on Saturday. Warren is fiercely protective of the team and his comments were made based on conversations with me and with the intention of deflecting attention away from me.”

Yesterday Marler was let off for the forearm/elbow strike on Rob Evans, however he has been dropped to the bench for England’s match against France this coming weekend.

UPDATE: World Rugby have stepped in and said that Marler will need to face and independent World Rugby misconduct hearing, as his comments did indeed breach their code of conduct.