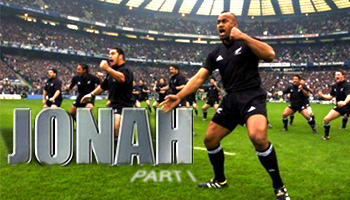 Johan Lomu was meant to play in this past weekend’s Help For Heroes match at Twickenham, but he unfortunately picked up an injury in training, so instead of showing a clip of him in action from a week ago, I thought it would be a good time to stick this in depth short documentary up.

The video, which features some extremely rare footage of Jonah, has been cut down to two 15 minute segments, the first of which you’ll be viewing now. The dvd was handed out at his comeback game in 2005, where he scored a try vs the Martin Johnson Invitational XV. He unfortunately picked up a shoulder injury on that day, but it was a tremendous achievement just be out there to after all his body had been through.

The clip goes all the way back to when Jonah was 14, with insight from former coaches and teachers as it goes through his progression from talented forward, to all conquering All Black wing.

We get to see never before seen footage of Lomu in his early days on the Sevens circuit, Super 12 action with the Blues and Hurricanes, his meteoric rise at the 1995 World Cup, behind the scenes gym sessions, and a whole lot more.

We highly recommended giving this a watch, so if there is one thing you do this weekend, make sure you find 15 minutes to sit down and watch it with a buddy, your old man, or even just on your own as it’s thoroughly enjoyable and you’ll get to see more of the great man in action than ever before.

Time: 15:19
Note: Video editing is as incoming, so one or two bits have bad cuts, but it’s no train smash.