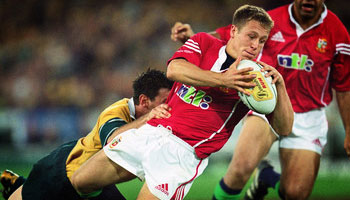 As you have probably heard, Jonny Wilkinson has said that he is definitely interested in heading over to Australia on the British & Irish Lions tour next year. He is hoping to contribute towards making right the wrongs of the last time they played there, in 2001.

Toulon flyhalf Wilkinson spoke to Sky Sports about his ambitions to go on tour, and said that despite having retired from England rugby, he would love to play for the Lions one more time.

Like Brian O’Driscoll, whose try against Munster was featured yesterday, Wilkinson will be 34 years-old by the time the ten-match tour rolls around next year. Age isn’t a factor in his mind though, and if he is fit and playing well, he’d love to get stuck in if selected.

“There’s no way I could say no to the Lions. In terms of what it represents, everything about it, a Lions tour is enormous. A fabulous thing. For me, that’s the beauty of it – it doesn’t matter where you’ve come from, it’s a case of ‘We’ve got six weeks, get your boots on and get into it.'”

Lions coach Warren Gatland has stated that its a clean slate for everyone. If Wilkinson is playing well, he could get selected. The flyhalf is aware of that, but is keeping his feet on the ground.

“I appreciate I’m playing in France – not out of sight out of mind, but a little bit further away – and there are a lot of guys doing a lot of good things in home nations rugby at the moment,” he said.

“There’s an element of realism for me. I’m a 33-year-old foreign player playing in France. I’m not England’s mainstay fly-half after 40 or 50 caps and leading the team.

“All I can do is play and see if I fit into their plans. If I don’t I’ll just have to make the best of what I’ve got here which, let’s face it, is good enough.”

– Who would you pick at ten ahead of, or behind, Wilkinson in your 2013 British & Irish Lions squad?