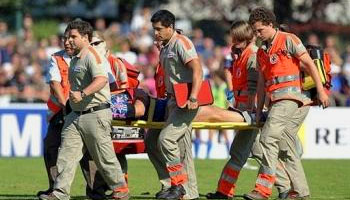 Stade Francais scored an impressive four tries on their way to a 37-16 win over Brive in the Top 14 on Saturday, but the victory came with a price as backrow forward Juan-Manuel Leguizamon was taken to hospital after being knocked unconscious in a high tackle.

The Argentine player, who was taken off the field on a stretcher, regained consciousness but was having medical tests to check his condition.

Stade’s Australian coach Ewen McKenzie said Leguizamon would be out for up to three weeks.

“His absence will be for between one and three weeks,” McKenzie said.

Leguizamon left the field in the 53rd minute after a vicious high tackle from Brive’s Tongan centre Sukanaivalu Hufanga, who was then given a red card.

It was a horrible sight as Leguizamon seemingly took the full force of Hufangas forearm to the chin, then went to ground in a heap as he was knocked out cold.

While it seems as though Hufanga would have been aiming for a solid hit in the chest to bring down the bigger forward, he got this horribly wrong and paid the penalty by not only receiving the red card, but allowing Stade to have their way with the game in the last twenty five minutes while he was off.

Initial thoughts? Suspension in order, or was the red card sufficient on the day?