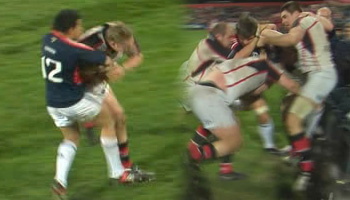 Ulster prop Tom Court was yellow carded this weekend for this late shoulder on the flying Munster center Lifeimi Mafi as he attempted to chase his own kick after a great run.

Late, a shoulder charge, and with no effort to pull out of the hit, Court was then dealt with by one of the Munster players, which caused a chain of events that saw virtually the whole team getting involved, giving the front row supporters the best seat in the house.

Referee Alain Rolland restored the calm, sending only Court off his offence, which was probably the correct decision seeing as it’s difficult to see if any clean punches landed or were even thrown for that matter.

Unfortunately this video is dead. If we’re able to get it back up at some stage, we will.