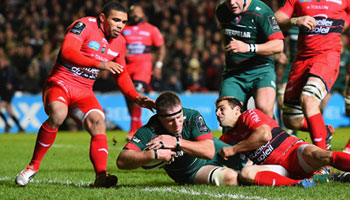 Brad Thorn rolled back the years as he scored a try for Leicester Tigers in their 25-21 victory over defending European champions Toulon at Welford Road. The win keeps their qualification hopes alive and ends the French sides nine-match winning streak.

Owen Williams kicked Leicester to victory as the only try of the game was scored by Thorn, still scoring tries at the now vintage age of 39-years-old. Williams picked up a personal points haul of 20, with his conversion and six penalties.

Bryan Habana and Drew Mitchell both scored well taken tries for Toulon, but it was Williams’ Man of the Match performance with the boot that got the 2001 and 2002 champions the win.

Leicester Tigers’ Richard Cockerill said that while winning at home is great, taking on the European champions in their own backyard in next weekend’s Round 4 clash will be a massive challenge.

“It’s a great win. It is the best we have probably played for 18 months,” he said.

“It will be twice as hard to go there and win next week. Toulon will be really cheesed off, and it really doesn’t get any more difficult than that.”

Watch the rugby World Cup to see more of these stars in action next year.

These highlights are in French but you can view short, English highlights on the official site