Leinster beat Glasgow to retain the RaboDirect Pro12 title for 2014 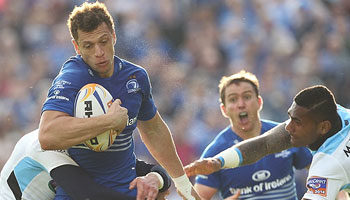 Leinster retained the Pro12 title with a 34-12 final win over a spirited Glasgow Warriors side in Dublin on Saturday. The win meant that Brian O’Driscoll and Leo Cullen ended their Leinster careers on a high, although O’Driscoll’s match didn’t quite go to plan.

Zane Kirchner scored twice for in what turned out to be a great day for him, as he was also selected in the Springbok squad for their upcoming home Test series. Shane Jennings and Gordon D’Arcy crossed for tries of their own, while all of the Warriors’ points came from the boot of Finn Russell.

O’Driscoll limped off after just nine minutes with a calf/hamstring/doesn’t matter any more injury, putting an end to what was meant to be his final eighty minutes of rugby. He was given a rousing send off by the RDS crowd however, and enjoyed the festivities come the final whistle.

Glasgow coach Gregor Townsend said that the more experienced side pulled through in the end. “It was a great occasion, but we were just not good enough on the day. Experience, better play from Leinster and we didn’t take our opportunities in the first half when we had the wind behind us,” he told BBC Radio Scotland.

“We have made real progress to get to a final. The players have played really well and this group is going to be here for the future. We have just got to make sure we win it next time.”

“Brian O’Driscoll has been immense. They don’t make them like that any more and we are just privileged to have him in the environment. It’s not all about one guy but there’s no doubt everyone wanted to make sure he, Leo and the other guys who are leaving us went out in the right way.”

As for O’Driscoll, he tweeted: “Not the way I’d hoped to play it out but sh*t happens!”

A great video of the Leinster celebrations post match