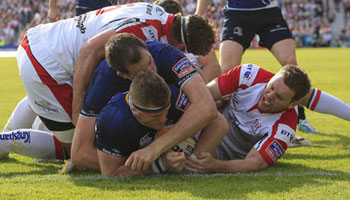 Leinster followed up last week’s Amlin Challenge Cup victory over Stade Francais with a hard fought 24-18 win over Ulster, claiming the RaboDirect PRO12 title. It was Joe Schmidt’s final game in charge before he takes on the Ireland coaching role.

A Shane Jennings try in the first half helped Leinster to a 16-6 halftime lead, before Jamie Heaslip went over after the break. Racing Metro bound Jonathan Sexton kicked four penalties and a conversion, while Ruan Pienaar kicked all the points for Ulster. The online betting odds were heavily stacked in Leinster’s favour at this point.

Robbie Diack was sent to the sin bin for a ruck infringement, and shortly afterwards Isa Nacewa joined him after high tackle which jerked Paddy Jackson back by the collar after a nice break.

That started a surge of momentum for Ulster as Ruan Pienaar slotted three penalties, but Heaslip’s try pulled things back in the Dubliners favour, and they held on for the win.

“I think we showed we are their equal now. I got a lot of heart from what I have seen,” said Ulster coach Mark Anscombe. “We can take heart. We’ve got to make sure we bounce back from this.

“We’ve come a long way this year. Not doing as best as we could, we could have beaten and should have beaten the best team in the competition. We had our chances but the key is discipline. You can’t give a good team like that chances.”

“The Rabo is a fantastic competition and it’s great to finally have the trophy in our changing room. Ulster deserve a lot of credit. They came at us, but we showed a lot about ourselves by winning out,” said Schmidt.

“I’m fatigued and more than a little worn-out, but it will be great to look back on this during the summer. And on the three years in general because I have enjoyed every bit of it.”