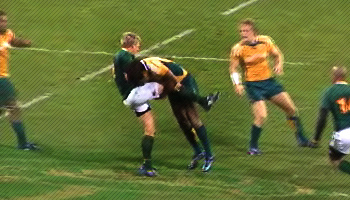 against Australia on the weekend

, Lote Tuqiri made sure that he was going to do what he could to halt their progress.

came in off his wing and timed the tackle perfectly, hitting Springbok center Jean De Villiers hard, causing the ball to be spilt and the turnover to the Aussies.

It was yet another moment of frustration on the night for the men in green, and meant that once again they’d turned over ball, losing possession when it was so vital to hang on to it late in the game, with the scoring of a try m

a few weeks back, had a stormer of a game, getting on the scoresheet and showing one or two glimpses of what makes him one of the most potent forces in world rugby with ball in hand.

This hit, while not the biggest we’ve ever seen, was probably more significant for the manner in which it broke down the Springbok attack. That said, it was still a great example of perfect timing and technique.


Wallabies triumph 16-9 over the Springboks in Perth