Ma'a Nonu knocked out cold by Anthony Tuitavake, who was clearly upset by it 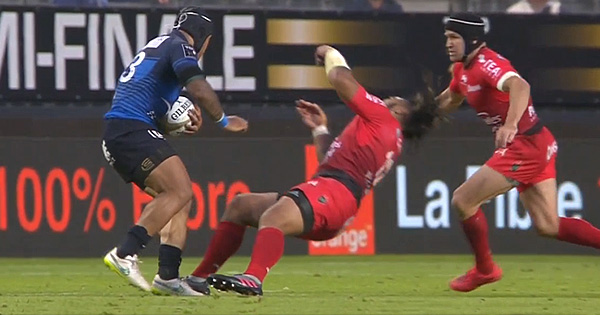 It’s fairly rare to see Ma’a Nonu on the receiving end of a big knock, but against Montpellier in Toulon’s Top 14 Semi Final the New Zealand legend was knocked out cold, and it was due to a big charge by a former teammate and clearly, a close friend.

Nonu went into the tackle a little too high and felt the full force of former All Black Anthony Tuitavake, the powerful centre who first played on the wing when he was Test capped against Ireland eight years ago.

We first saw him here on RD when he scored a stunning individual try against the Cheetahs in the 2008 Super 14, then saw him making a big tackle on Odwa Ndungane a week or so later.

A few months after that he was playing for the All Blacks and against England he made some cracking hits all over the park, first on Mike Brown and David Strettle, then flanker James Haskell.

Tuitavake played six matches in total for New Zealand, but later moved to Japan and then France.

On Saturday night it was his shoulder that made contact with Nonu’s head as the two former Blues players met in an upright tackle. The double World Cup winner was out cold before hitting the floor, and Tuitavake immediately showed genuine concern, which was fantastic to see.

While you would think it would be the natural reaction, we do often see situations where someone knocks out another – albeit accidentally – but doesn’t show any initial concern at all.

Nonu walked off, a bit groggy, and was later seen smiling when doing a ”walk the straight line’ test as part of the concussion protocol in the changeroom.

A few hours after the big knock he tweeted – in French – that he appreciates all the care and concern and that he will be very happy to be in the Top 14 Final in Barcelona. He will no doubt face a few days of head assesment tests before it is confirmed whether he gets go ahead to play or not.

Earlier in the match Nonu combined with returning Leigh Halfpenny to score a powerfully taken try. You can see that at the bottom of this post, below the knockout incident.

Toulon came out eventual winners, 27-18, so will face Dan Carter’s Racing 92 in the final.