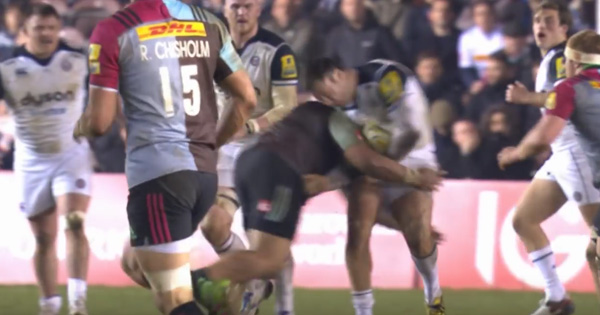 Harlequins flanker Mat Luamanu made this cracking tackle on Bath’s Matt Banahan this past weekend, rocking the 6ft7 former England winger to the floor. Unfortunately for Luamanu he appeared to come off second best, but it was a great hit nonetheless.

Luamanu was last seen on RD a few months back when he absolutely demolished Seremai Bai with a big carry, and then only a week before that when he welcomed George Smith to the Premiership with a punishing double hit.

While Banahan himself is not a small man, this particular tackle showed that body position and timing is everything when it comes to getting the better of your opponent.

Banahan has done that himself on a number occasions, so take a look at the Related Posts below to see a bit more of the 16 times Test capped giant throwing his weight around.

While we’re at it, in the same match against Bath Luamanu also sparked another great bit of play.

He fended Ollie Devoto not once but twice, which then led to some stunning hands by the Harlequins backs and nearly a try in the corner. You can see that below.