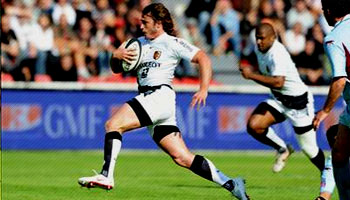 This superb piece of running comes from the recent Top 14 game between Toulouse and Bourgoin, in which the home side Toulouse came out overwhelming winners 57-14.

Eight tries were scored, and this was just one of those as Toulouse completely outplayed Bourgoin on their way to victory.

Flying French winger, playing fullback on the day, Maxime Medard scored the try of the game as he got the ball in his own half and took off, beating defenders with his great running lines and excellent balance when gliding through the gaps like a slalom skier.

As I’ve said in the past, when we see top players on form like this they make the game look so easy, and it can often be misinterpreted as bad defence. But, if it were so bad, everyone would score tries like this, so I always think it’s best to just appreciate it for what it is, and on this occasion, acknowledge a great try, and a fine player in the making.

Expect to see much more of the kid with the massive side burns in the future, as hes only 22 and has heaps of talent and speed to burn.

It’s only a short clip unfortunately, and commentary wasn’t the original, so some music has been thrown on it.