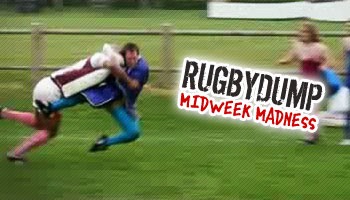 With the help of a forum request, weve come across this rather amusing clip taken from a TV show that claims to mix science with lunacy.

Described as a show featuring five lovable lads who probe the big questions in life and the universe, and who touch things they shouldnt. Ready to be kicked in the crotch, electrocuted and have the fat sucked out of them, they sacrifice in the name of science.

Theyre guided by a professor, as seen in the clip, who provides the facts regarding these experiments.

Rugby tackling was the order of the day in this clip, as you can see two of the guinea pigs being smashed around by a bunch of players, as the prof discusses the impact on a players body when getting hit, comparing it to that of a car crash.

Funny to some, interesting for others, we figured wed stick it up and see what you think.