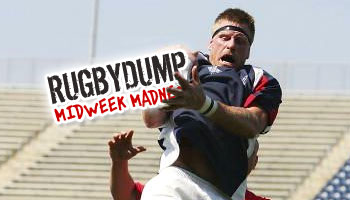 
Munster up against the USA


in a pre-season friendly at Rentschler Field, Connecticut in the USA. Back in June 2005, it was Wales who met the Eagles at the same venue, a match which resulted in a crushing defeat for the hosts.

All 11 Welsh tries were converted by Ceri Sweeney, taking the final score to 77-3, as a solitary Mike Hercus penalty was all the hosts could manage against the powerful tourists.

We like a bit of variety here on Rugbydump, so this is a short, comical clip from the match that we thought we’d share as it’s been lying around for some time now.

It shows Hercus, at 63-3 down, throw a bullet pass that certainly looks like it wasn’t intended for lock Alec Parker. Parker somehow hangs onto it though, but as he does, the fired up Welsh wing Craig Morgan gets to grips with his jersey and drags him across the turf like a rag doll, perhaps epitomising the day for the home side.