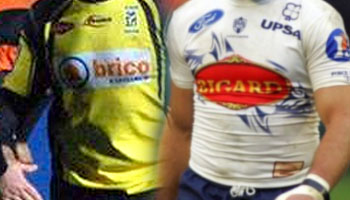 From the same French Pro D2 game that brought us absolute mayhem on and off the pitch, as seen


, you probably haven’t seen this massive hit that happened earlier in the match.

As the restart approached, the Agen flyhalf thought he had spotted a gap and an opportunity to catch the Mont de Marsan defence napping. He got it horribly wrong though, as his right wing Luc Lafforgue can testify to after being absolutely smashed by the Montois replacement, Georgian winger Irakli Machkhaneli.

Machkhaneli is the same player who put in one of the hits of the World Cup against Namibia, which

, resulted in a try.

As you can see from the reactions afterwards, tempers were high all throughout this game, which eventually boiled over into what we saw in the other clip.