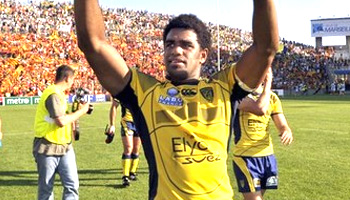 Clermont have secured themselves another shot at the French Top 14 title after crushing Perpignan 21-7 in the first of the Semi-Finals this past weekend. The victory was in part due to the Fijian flyer Napolioni Nalaga, who scored two good tries on the day.

The atmosphere at a boiling Stade Velodrome in Marseille was festive to say the least, as 55 000 colourful fans packed the stadium knowing that a place in the prestigious final was 80 minutes away for one of the two star teams.

After 22 minutes though, when Nalaga scored his first, you could see the writing was on the wall as Clermont showed their dominance over their forward based opposition. Their multicultural backline – featuring an Australian, Italian, South African, Fijian and Frenchmen – shone as they went about the task of doing the business on Perpignan, the fourth place team who they were a whole 17 points ahead of on the log.

Nalagas first try looked easy, as he simply brushed aside a feeble tackle from Nicolas Laharrague that, for a man of the Fijians strength and balance, had no chance of ever fazing him. The powerful hand-off allowed him to scoot down the line and dot down for his 17th try of the season.

With the halftime score at 16-0, the game looked all but over, and when seven minutes after the break Nalaga was released again just inside his own half, the ominous reality for Perpignan was that another try was on the cards. A simple one on one with their replacement winger Christophe Manas was not enough to stop the big man Nalaga, as he brushed him aside and dived over, taking his tally for the season to 18 tries, easily the front runner in the Top 14.

This boy is a star in the making, if not one already, and as weve said before, is one to watch and someone Clermont will do well to hang onto for the future.

This victory means that they will now meet Toulouse in the final of the Top 14, after they themselves beat Stade Francais, a game that well try bring you the best bits from sometime this week.