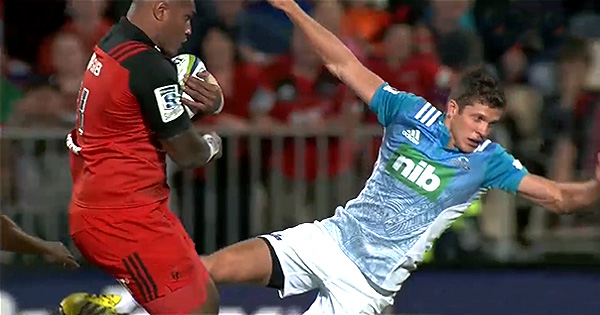 The Crusaders beat the Blues 28-13 in a Super Rugby Round two match earlier today, with this try being the pick of them, set up by a sensational bit of play by giant Fijian, Nemani Nadolo. Here is a look at the try, and the massive bump-off by the big winger.

Nadolo sparked the try with a good catch and a casual swat away of flanker Blake Gibson before picking up a head of steam to barge into the attempted tackle of new Blues recruit, Matt Duffie.

Former NRL player Duffie went airborne, and after possession was recycled, the Crusaders linked up to score a classic try, with Read eventually diving over after a nice offload.

Last week we saw 130kg Nadolo bundled into touch by a far smaller man, but on this occasion there was no chance of that happening, as Duffie tried to simply put his body in the way, but the laws of physics said nope, we know better. Great try all in all.