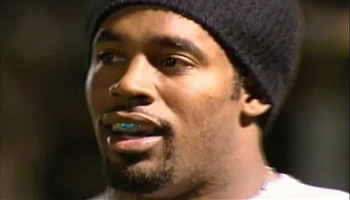 The comparisons between NFL and Rugby will be the subject of discussion for probably as long as the two games exist. Not a lot of top athletes are privileged enough to get the chance to try their hands at both. Until now that is.

Dhani Jones is an American Footballer who spent last season with the Cincinnati Bengals in the NFL. Earlier this year though, Dhani came to Blackheath RFC in London to experience rugby for the first time, and even appeared for them in a cup match against Cornish side Launceston.

Jones is an aspiring television presenter, and thought it would be great to learn more about rugby as part of a new tv show called

, in which the 30-year-old American footballer tries new sports.

The tv company making the pilot contacted Blackheath’s director of rugby, Harvey Biljon, and requested that Jones visits the club for the experience.

Our players thought it would be fantastic to have a full-time athlete from a top American sport testing himself among our amateurs, Biljon said.

Blackheath, until a couple of recent defeats, were pushing for promotion from National League Two and werent prepared to risk introducing a rookie to competitive rugby in an important league for them.

The cup competition was where the opportunity existed, so a few training sessions later and he was ready, almost. Before training on one occasion, Biljon took Dhani for a jog, passing the ball between them. Try and spin the ball, Biljon told him. Im trying, man, Im trying, was the response.

Jones got his chance to come on as a sub against Launceston and made a few tackles, but most importantly, got a taste of this great game and now knows exactly what rugby is all about.