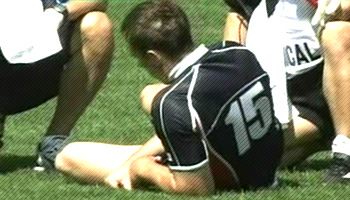 Reminiscent of the crunching tackle he made

Latu was highly impressive at the World Cup with his physical brand of rugby as well as his fantastic leadership on the field, mainly through putting in tackles like this one.

Unfortunately for the Tongans in this years Pacific Nations Cup though, they’ve been hit hard by the unavailability of key players based in Europe and subsequently havent won a match as of yet. The ever improving Japan shocked them on this occasion with a 35-13 victory that was a great achievement for the Japanese, who put up a decent fight against Australia A too.

Under the guidance of former All Black John Kirwan, Japan have shown they’re no pushovers at this level and have scored a few fantastic tries in this years tournament.

Physically though, the Tongans will always be more aggressive, and despite the loss, there was no shortage of effort on display, with this being just one of the crunching hits that the Japanese felt the full force of.