Perpignan vs Bourgoin produces two yellows and a red 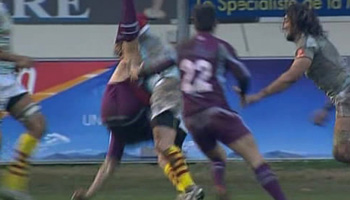 There were three big incidents this weekend in Perpignan’s 40-14 victory over Bourgoin in the French Top 14 championship. All three resulted in cards for the perpetrators, with one of the incidents possibly having a slightly harsh outcome for some people.

The Catalan side scored five tries which resulted in a bonus point win as they keep in touch with the league leaders.

Bourgoins poor discipline cost them as they played a man down for a large part of the match.

South Africans Rudi Coetzee and Philip Burger were involved in the first yellow carding, with Coetzee coming in for a solid hit that was deemed illegal by the referee.

You decide for yourself, but the commentators themselves were in no doubt that it was perfectly fine. The big wing spent ten minutes in the cooler regardless.

Captain Julien Frier was then shown a red card shortly afterwards for some foul language and anger directed at the ref. Frier was apparently saying something about him just waiting to blow up Bourgoin at any opportunity, which led to his frustration.

Late in the game we then saw a reckless spear that was followed by a brawl as tempers flared. Replacement Meyer was yellow carded for the dangerous tackle.

On a sidenote, Perpignans Dan Carter didnt return at halftime after injuring his Achilles tendon.

“The pain was getting worse after about half an hour of the match and as a precaution I came off at half-time. It was frustrating because I really wanted to play and the team had a really good match.

“I’ll get tests on Monday and will decide with the staff if it would be better to take several days off from training.”